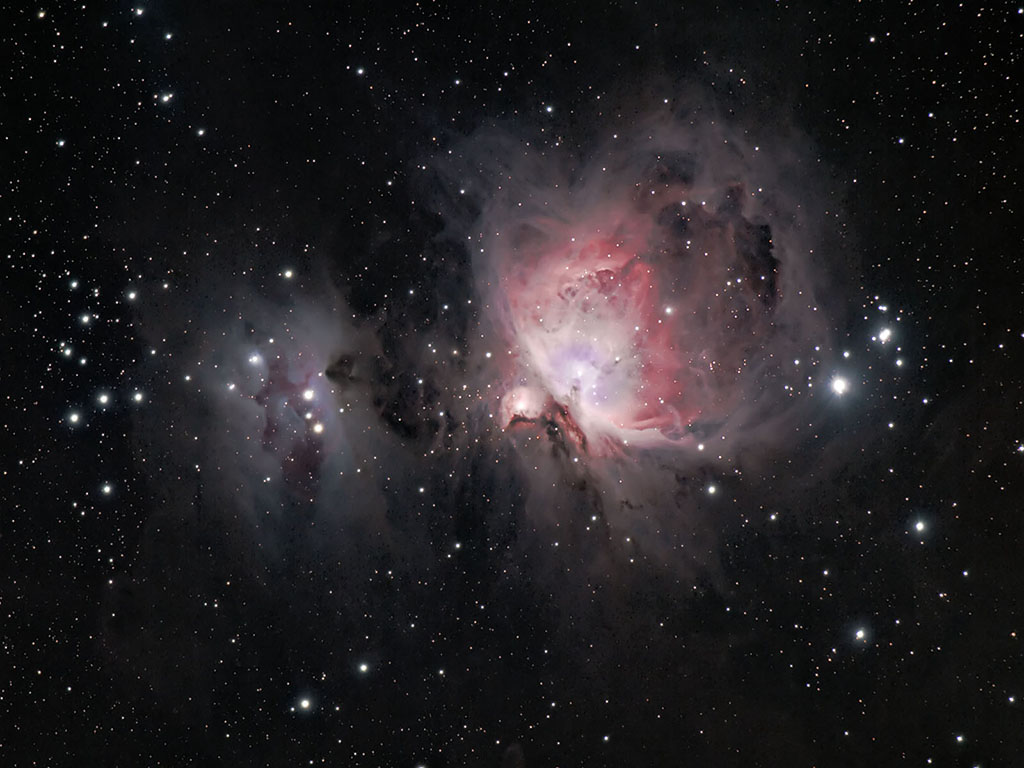 This was one of the first of my astro-photos that I was happy with – about 3 years after I started – and it is still my favorite target. It was captured in late September of 2008, very late at night. The problem with Orion (for those of us living in the northern parts of Earth) is that it is never visible in the summer nights. In late summer it comes up in the east just before sunrise and by spring it sets in the west shortly after sunset. So it’s a great sight in the winter night sky and easy to find, since the Orion constellation is easily recognized from the 3 bright stars of Orion’s belt. But photographing it in the winter means waiting for a clear night with no moon, then working for hours in the cold. I am hoping to shoot the Orion Nebula again this winter, since my equipment has improved significantly since this image was captured.

The nebula is part of Orion’s sword, a line of stars “hanging” from Orion’s belt. It is very bright and therefore easily visible to the naked eye. In fact, the huge range of brightness from the bright, young stars at the core to the faintest clouds around the edge is so great that it is nearly impossible to capture without using two or more exposure durations. In this case, the main image is formed from 2 minute sub-exposures while the core is from 15 second sub-exposures.

The Orion Nebula is about 1,340 light years from Earth and is the closest star-forming region. It is part of an enormous structure called the Orion Molecular Cloud Complex, which is roughly the size of the entire Orion constellation. That is, if you could see this structure in the night sky it would be about 20 degrees across, or about 40 times as wide as the Moon. I’m hoping to photograph this whole structure this winter.