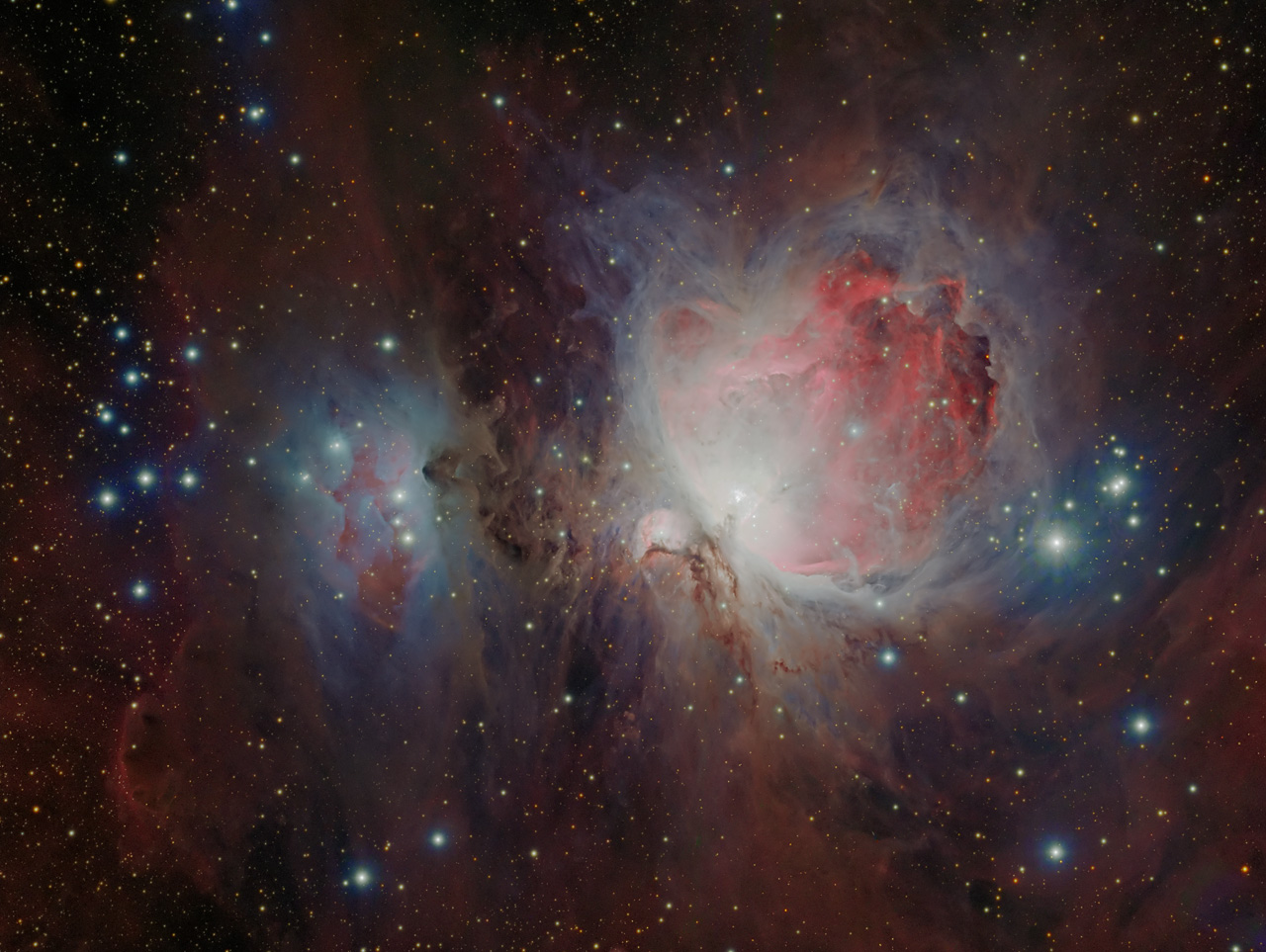 Here’s one more image captured during my trip to California, the Orion Nebula.  Orion is a favorite of both astrophotographers and visual observers.  It is often the first target beginners shoot, and one that some people shoot over and over again.  In fat, the first astrophoto I captured that I was really happy with was of the Orion Nebula.  Part of the reason for its popularity is simply that it is gorgeous.  But equally important for the beginner is that it is very bright, so it’s relatively easy to get a decent image of it.

At the same time, it is actually difficult to get a really good photo of Orion, partly because of that extreme brightness.  While the center is extremely bright, there is also a lot of very dim nebulosity just a short distance away from the center.  The difference in brightness between this dim nebulosity and the bright core makes it almost impossible to capture all brightness levels without using a wide range of exposures and combining them to show details in all the different parts.  In this case I used exposures as short as 4 seconds, and as long as 4 minutes (not counting the H-alpha exposures, which are as long as 8 minutes).  I used the same kind of processing (luminance masking) as in the Horsehead Nebula, but it is more important and more extreme in the Orion Nebula.  There are 4 very bright stars at the center (just right of center of the frame) called “The Trapezium” and they are literally millions of times brighter than the reddish brown dust you see around the edge of the field.  As shown here the 4 stars are too small to see clearly, but they are distinct and separate in the full resolution image.  But even in the 4 second exposures these stars saturate the image sensor.

For some reason, I often see images of the Orion Nebula that are quite garish in color saturation and over-sharpened.  Perhaps this is because once you’ve done the processing to combine the bright and dark frames it’s hard to stop working on it.  In some cases I’d say the image had been processed to within an inch of its life!  So I tried to avoid that here.  I made sure that the Trapezium stands out from the relatively bright nebulosity around it, but didn’t push the local contrast to enhance the structure in that region.  Likewise, the color is somewhat restrained.  One could argue that the brown nebulosity is really red (H-alpha regions), but if it were shown as bright red it wouldn’t have the proper relationship with the brightness of the red closer to the center.

The figure to the left of the Orion Nebula is known as the Running Man Nebula.  The Running Man is about 150 light-years more distant than Orion at 1500 ly versus 1350 ly.  Both are in the region known as Orion’s sword – hanging from his belt of 3 stars that make the Orion Constellation one of the mot easily recognized.