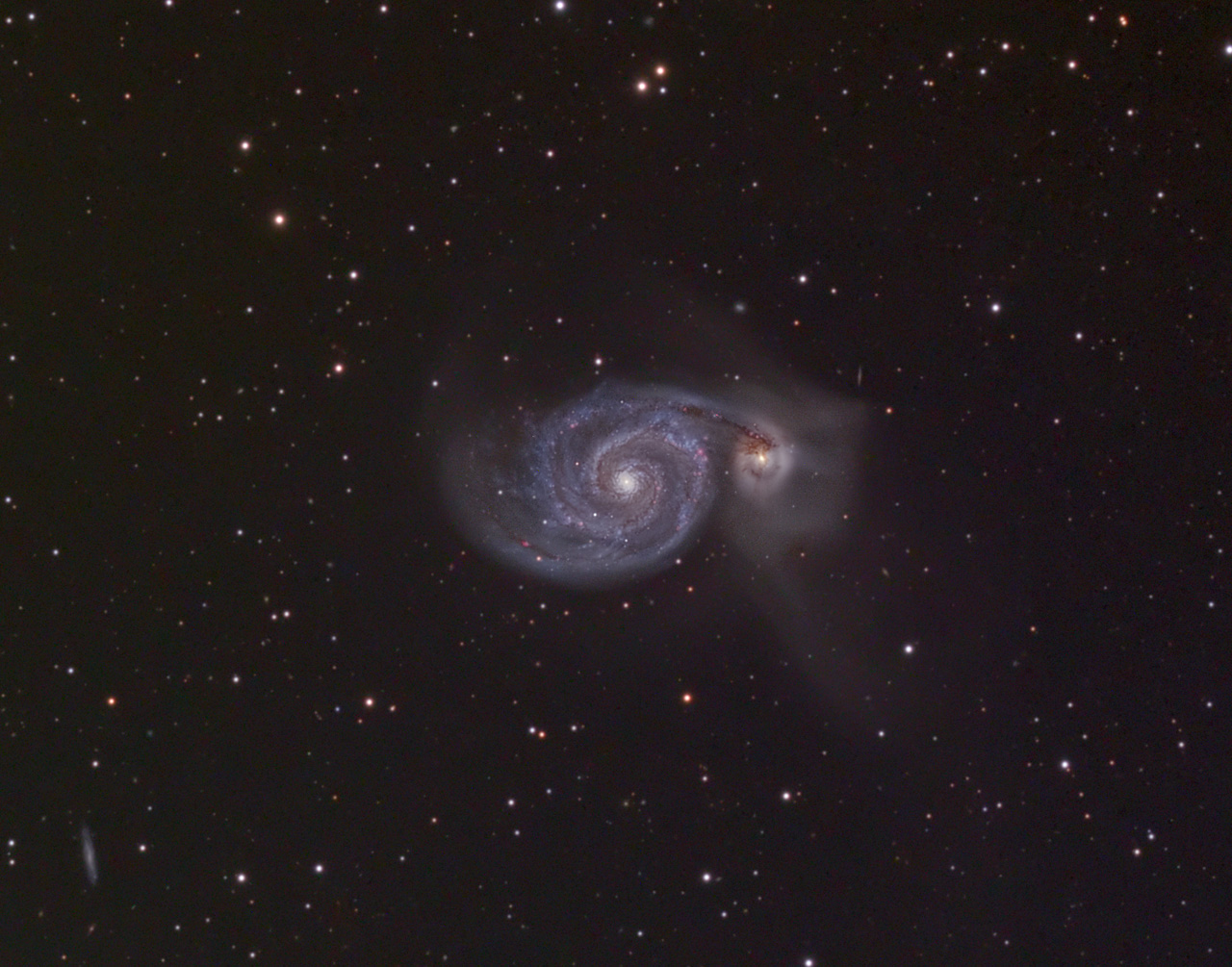 It’s fun to imagine that distant worlds might be home to other sentient beings, who stare up at their night sky to see the Milky Way Galaxy (although, even translated to their language, that would be a very odd name for it).  Perhaps there is some such world or worlds in the Whirlpool Galaxy, also known as M51 or NGC5194.  But in this case, “home galaxy” means that I captured this image of M51 from my home observatory, which is unusual because 99% of the images I capture from here are narrowband images of emission nebulae.  And I was surprised at how well it turned out given both the light pollution of nearby Portland, and a fairly bright Moon.

Of course, the main reason I chose this target is that the emission nebulae are all within the disk of the Milky Way, which doesn’t rise until 3AM or so this time of year.  But it’s also important that M51 is almost directly overhead this time of year, which means that it’s a prime target that a lot of people have been shooting.

I captured more than 50 sub-exposures of luminance, and 12 each of R, G, and B (all at 4 minutes exposure), for a total of about 5.7 hours.  There is also 4 exposures of H-alpha at 15 minutes each, but it is used (quite sparingly) just to highlight some of the H-alpha regions in the galaxy’s spiral arms (the reddish spots).  All exposures were captured with an ASI1600MM camera using minimum gain setting.  This camera has 16 million pixels, but this image is cropped to less than half that many to make the galaxy a reasonable size.

Most of the galaxy (the brightest portion) is actually made up of just the 20 sharpest luminance frames, plus the underlying color.  Furthermore, I used the deconvolution tool in CCDStack to make it sharper.  All 50+ luminance frames are used in the dimmer regions to minimize the noise, and the same regions are processed with a noise reduction filter.

M51 is really 2 separate, but interacting galaxies.  They are sometimes referred to as M51a and M51b, but “b” has its own NGC designation, 5195.  Both are approximately 24 million light-years away in the constellation Canes Venatici.  In 1845 the larger galaxy was observed to have a spiral structure, and this was the first time such a structure had been observed.  Although we now know that this is a very common structure for galaxies, at that time they didn’t even have the notion of a galaxy, to say nothing of differing structures of galaxies, so this was an important and exciting discovery.

So that makes 3 galaxy photos posted here in about a week, while I had not posted anything for several weeks.  With the Moon approaching Full status, there probably won’t be any new images for the next few weeks, but I will try to keep you up to date on important news in astronomy.