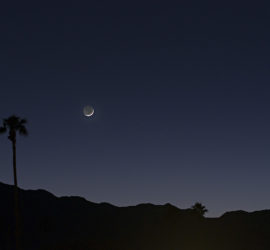 This “young” crescent Moon was captured on 1/26 from the parking lot of our condo.  At that time it was thin enough and set early enough that it had no impact on astrophotography, but in a few days it will become annoyingly bright and late.  Accordingly, we’ll be returning home soon, although I am not looking forward to the gloomy weather that will plague the Portland area for months to come. I have captured some other targets that aren’t yet processed, and probably won’t be until after we get back home. It was a great trip.  Aside from some very […] 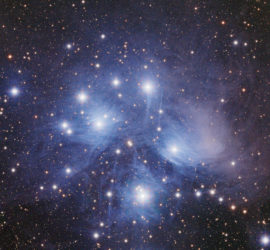 Back when I was selling prints of my astrophotos, the Pleiades/Subaru image was my best seller, even though it was done long ago – when my skills were significantly less developed.  And since it is well positioned in the sky now, I decided to shoot it again and use more sophisticated processing. The problem with the original version is that the very bright stars are “blown out” – just large white blobs.  Getting them to look more like pinpoint stars requires shooting some much shorter exposures in addition to the long exposures needed to get the faint dust.  The trick […] 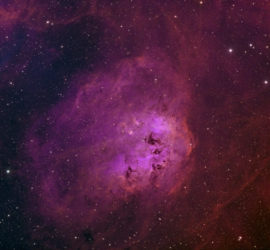 My last astrophoto was of IC405, also known as the Flaming Star Nebula.  IC410 is a close neighbor of IC405 – a bit of it is showing at the edge of the IC405 photo.  This nebula is best known for a small feature near the center, known as “The Tadpoles”: Most of the data for this image was captured near the full moon, and even though it is all narrowband data (using 3nm filters), the moonlight and haze made the O-III frames pretty bad.  The S-II frames were also less than ideal, so I leaned heavily on the H-a data […] 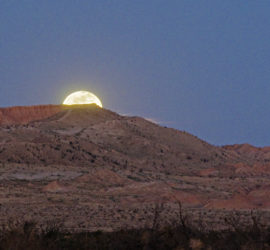 Yesterday’s Full Moon seriously limited the amount of deep-space imaging I’ve been able to do lately, but also provided a great opportunity for some “terrestrial” photography.  My friend, Mike, had calculated where we needed to be to place the rising moon just over Font’s Point, a popular local attraction.  I wasn’t really prepared for this in that I didn’t have a long focal length lens and hadn’t worked out how to bracket the exposures to capture both the dimly lit foreground and the very bright moon.  This was captured with a 200mm lens on a Nikon D300 camera.  I could […]