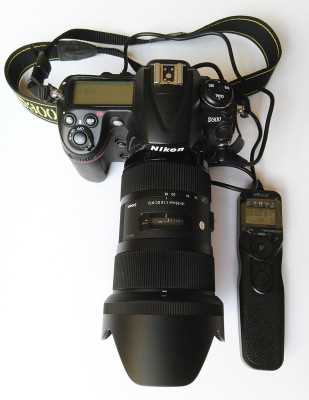 Almost all of the profit I make from selling astro-photos goes back into the effort to capture more and better images.  My most recent acquisition toward that goal is this Sigma 18-35mm f/1.8 lens and Vello intervalometer.  They are shown here attached to my old Nikon D300, but the lens can also be used with my QSI CCD cameras, or even a Canon DSLR.

This fairly wide angle and very fast lens will allow me to try more “night sky landscape” photography – something I have been wanting to do for years, having long admired the work of people like David Lane (http://www.davelaneastrophotography.com/ – featured in my 2016 Night Visions calendar), and Ben Canales (http://www.thestartrail.com/).  The lens plus intervalometer will also be useful for photographing meteor showers and aurora (if I’m ever lucky enough to see another nice aurora like the one we had at OSP this year).

The key to this type of photography is that the lens has to be short enough (wide angle) that a modestly long exposure (10 to 30 seconds) does not show star trails.  But it also has to be fast enough to capture dim objects in such exposures, and sharp enough that you can get good quality images with the aperture wide open (or close to it).  Preliminary testing shows that this lens produces nearly optimal sharpness at f/2.8 and is generally acceptable at f/1.8 (wide open).  Depending on what part of the sky is included in the shot, the exposure will be limited to between 10 and 30 seconds before star trailing becomes evident.  This testing was done with the Nikon DSLR and I haven’t yet tried it on the QSI cameras.  In that configuration it will be a bit less wide angle (because the sensor is smaller), but it will also crop off the outer edges of the image, where optical quality suffers the most.  I would probably use that setup more at the 35mm focal length on a tracking mount for long exposures of whole constellations.