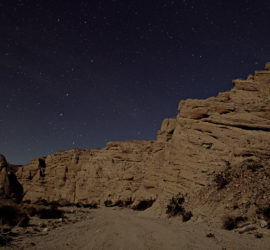 In an earlier post I shared a picture taken at the top of a canyon wall, showing the canyon below and the the Big Dipper above (through some interesting clouds).  When I went down into the canyon (not actually the same one) I thought I’d try the same thing from this different perspective.  It would have been great to shoot this looking up the canyon wall, just as the previous shot was looking down such a wall, but since the Big Dipper was pretty low in the northern sky, that was not going to work.  Indeed, I had to walk […]

The Astro Imaging Channel is a Google+ group and YouTube channel that conducts weekly tutorials, presentations, and discussions on various aspects of astro-photography (https://plus.google.com/+TheAstroImagingChannel).  Each week, they select an “Image of the Week” from member submissions and make it the banner image for their home pages on Google and Facebook.  This week they selected my image of the California Nebula! You have probably seen this image as the banner on MY Facebook page.  Here’s a little more information about the object and the image:  The California Nebula (NGC1499) is an emission nebula in the constellation Perseus.  It is about 1,000 […] 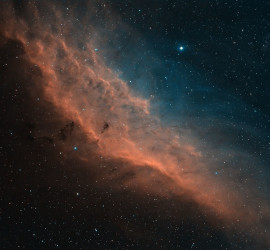 The sky had been cloudy for what seemed to be an eternity, but we’re now in a brief period of sunny days and clear nights.  Of course, it is also very cold and windy.  The cold I can deal with by operating the observatory from inside the house as much as possible.  Wind, especially a strong jet stream, is more problematic. I’ve been shooting the California Nebula (NGC1499) for the last 2 nights, using the William Optics Star71, which is relatively insensitive to atmospheric turbulence because of its small aperture and low magnification.  The first night I captured a couple […] 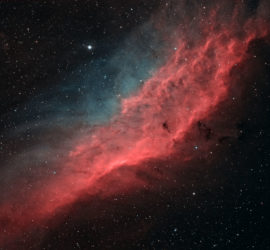 Buy a Print (Updated Dec. 2017) This nebula contains all 3 of the target spectral lines, hydrogen-alpha, sulphur-2, and oxygen-3. But the O-3 signal is so weak that you could literally count the photons by hand as they arrived!  To provide some color in the processed image I could have (largely) ignored the O-3 and made a bi-color image of H-a and S-2.  Instead, I used a slight variation on a commonly used process; creating a bi-color image from S-2 and O-3 (S-2 as red and O-3 as green and blue), then applying H-a as a luminance layer over the […]