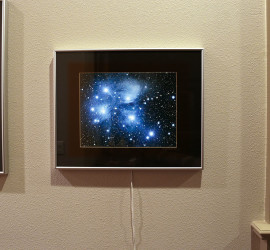 For many years Wa-chur-ed Observatory has offered Backlit prints of original astro-photography in various sizes. These have always proven to be wildly popular and this did not go unnoticed by other astro-photographers, who requested that I make backlit prints of their images. But the stunning appearance of backlit images is not limited to astro-photography, so I am pleased to now offer these backlit frames and prints to everyone – for any image you want; your favorite nature photo, family portrait, even your own astro-photo! Why Backlit? Images printed on paper can never have a contrast ratio of more than 100:1, […]

I’ve just finished putting together the largest backlit print I’ve ever done, a 26 x 32 inch frame with an image from the Hubble Space Telescope of the Tarantula Nebula. That’s me standing next to it – just to give you a sense of the size.  Note that this “picture of a picture” doesn’t do it justice.  I had to dim the back light a lot to avoid it being completely over-exposed, and even so it is a bit over-exposed and the rest of the image a bit under-exposed. What makes this really interesting is that the source image (available […] 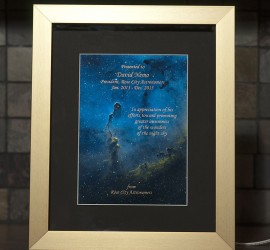 At the last meeting of the Rose City Astronomers for 2015, this plaque was presented to outgoing club president, David Nemo, in recognition of his service and achievements for the club.  The plaque was constructed using one of my backlit (film) prints, but the cover glass was engraved with a message of thanks. The frame is deeper than I usually use, which allowed us to put a spacer between the film print and the glass.  It’s only half an inch, but that’s enough to really separate the text from the image.  The lettering is filled with gold, as you can […]