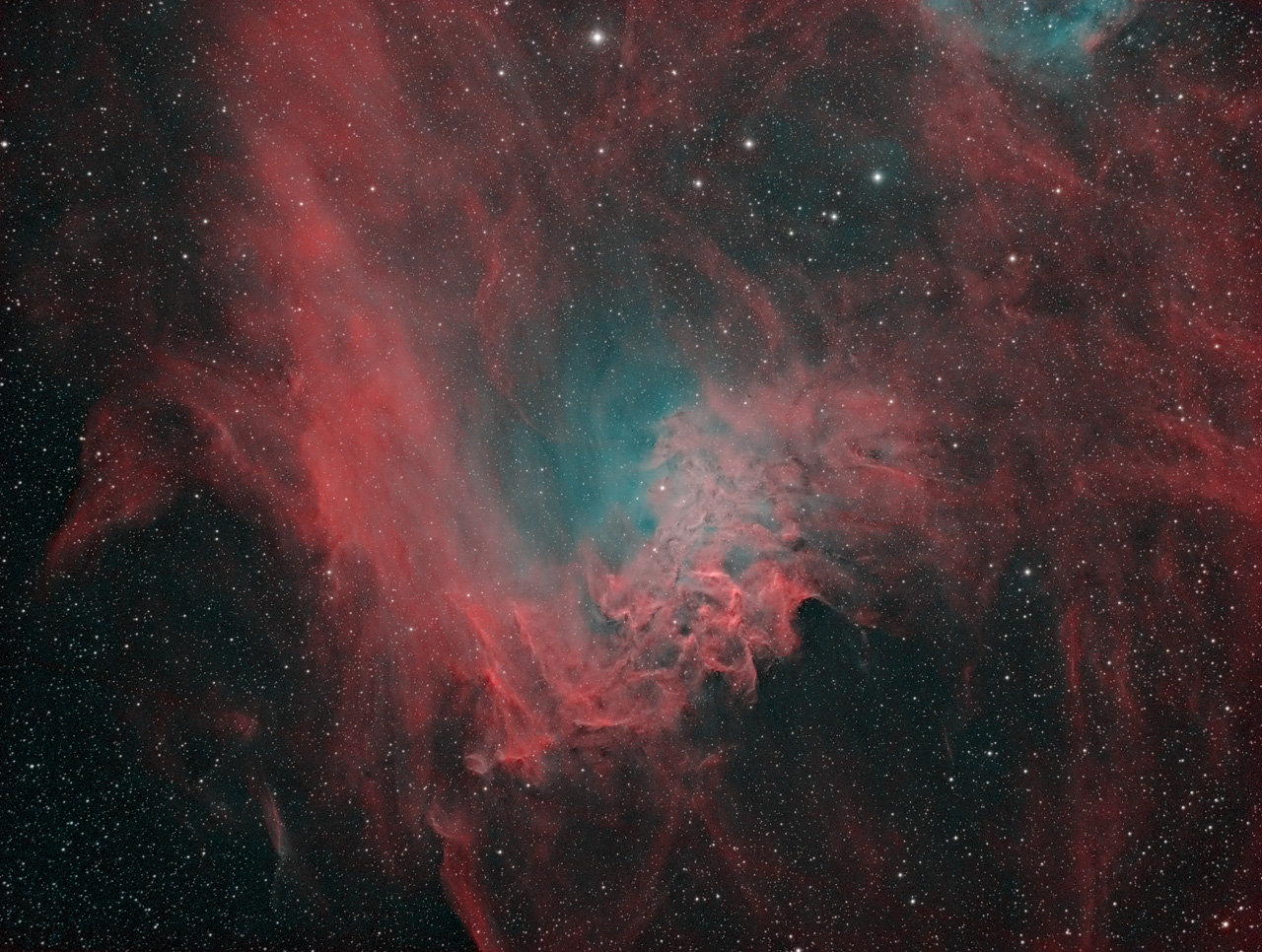 My second image from our Winter in southern California is the Flaming Star Nebula (cataloged as IC405, Caldwell 31, and Sh2-229).  This was captured with the new Stellarvue SVX80T with 0.74X reducer/flattener, yielding an effective focal length of about 350mm at f/4.4.  With such fast optics a lot of information can be captured in a relatively short time.  In this case, I captured 4 hours of H-alpha, and 2 hours each of O-III and S-II.  The downside is that the optics are very sensitive to spacing and tilt.  Stellarvue recommends a spacing of 55mm +/-0.75mm from the reducer to the sensor, but I’ve found that 62mm works best.

The frames were captured with Maxim DL (I’m planning to transition to using TheSkyX for both capture and guiding, but haven’t done it yet).  Calibration, alignment, and stacking were done in CCDStack2, and post-processing in Photoshop.  The channel assignment is H(SOO_starless).  That is, I made a bi-color image with S-II as red and O-III as cyan (blue and green), then removed the stars from this image (using “starnet”), then applied the H-a frame as luminance.  This is a good way to go with subjects that have a very weak signal in either O-III or S-II.  In this case, the O-III is almost non-existent, but there is enough to define the color as cyan in the center region and at the top right.

The first 2 hours of H-alpha were captured from my home in SW Washington, but the rest was captured here in California – with a telescope made in California!  More specifically, a very kind neighbor on the outskirts of town allowed me to set up my gear on their property and leave it set up overnight so that I didn’t have to go through the alignment process the second night, a big time saver.  It was very cold (just above freezing) and surprisingly wet, so I had the dew heater on all night.  But I think that the moisture was coming from the ground rather than the air.  My table got quite wet, but the telescope stayed dry.  The moisture was from heavy rain in recent days, so I’m hoping it will no longer be a problem after the ground dries.

I mentioned that there is a bit of O-III (in cyan) in the upper right.  I believe that it is part of NGC1893, which is sometimes included in photos of the Flaming Star Nebula, but I was unaware of it, so the bit of it that shows here is unintentional.