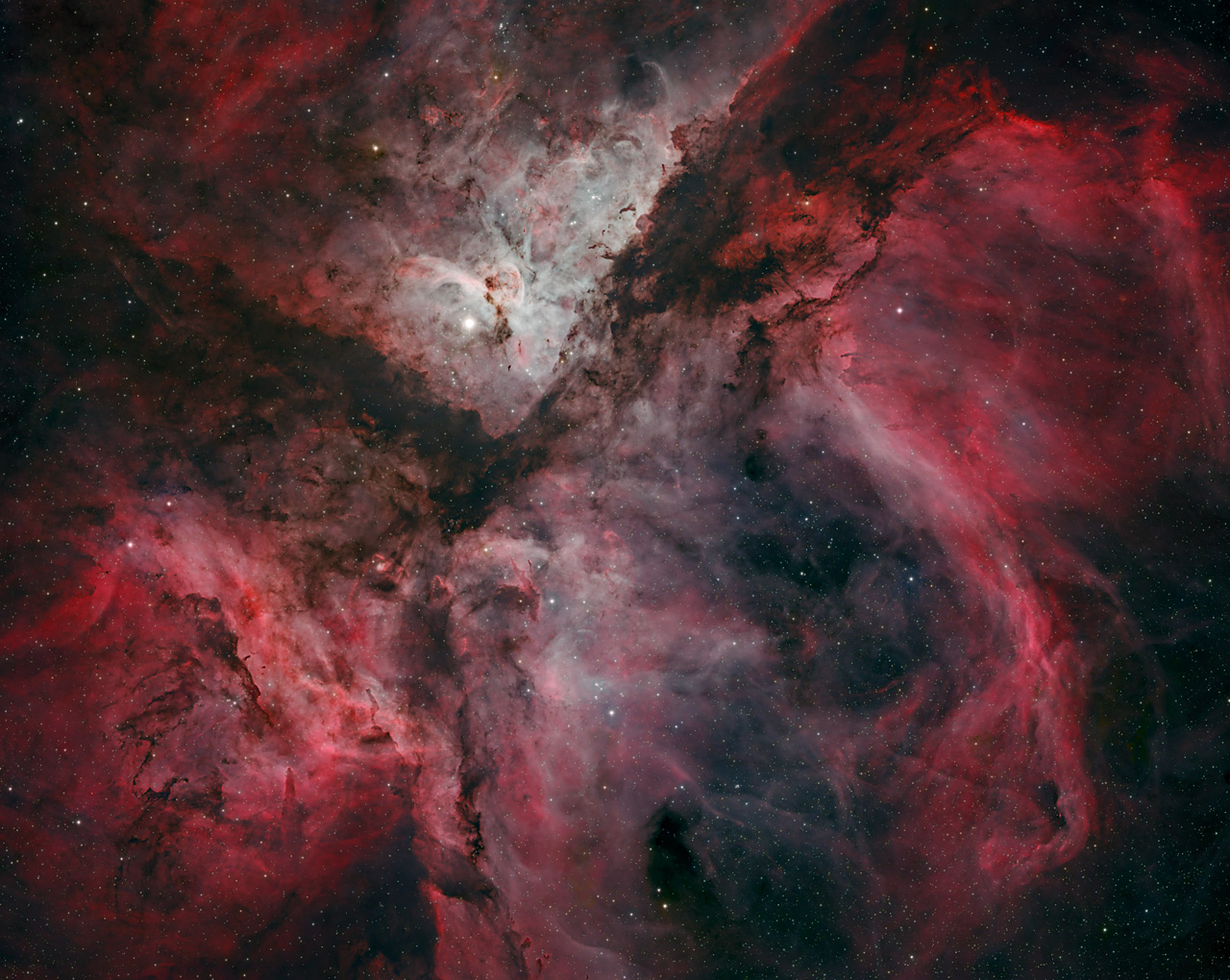 I hope it doesn’t sound too boastful for me to say it, and to some degree it is a matter of personal taste, but I think this is just gorgeous, and the best astrophoto I’ve produced to date.  It is, of course, from the remote observatory in Australia, and is not visible from up here in the north.  Eta Carina is quite bright, and large – about 4 times the size of the Orion Nebula.  It’s a mixture of emission, reflection, and dark nebulosity, as the best ones often seem to be.

For this type of target I would typically favor a narrowband, false-color image, and I did get all 3 bands of narrowband data in addition to RGB, but found this combination to be the most attractive.  It was made by removing the stars from a straight RGB image, then applying the H-alpha image as luminance.  I sometimes remove stars from a narrowband image so that the colors can be changed without messing up the color of the stars, but don’t often do it with RGB images because it’s difficult to remove the stars cleanly when they are relatively bright.  In this case I removed the stars just to reduce their tendency to distract from the rest of the image, and I did not make significant changes to the color.  Applying the H-alpha channel as luminance adds some of the stars back in, and adds more contrast (and drama) to the nebulosity.

Obviously, not all of Eta Carina is shown here – that would take at least 2 panels of this size.  On the other hand, many subsections of the nebula are equally beautiful.  One of the most popular images from the Hubble Space Telescope is an extremely detailed view of the top center portion of this image.

Eta Carina is roughly 8,000 light-years from Earth in the constellation Carina.  The name actually implies a single star:  The so-called Flamsteed-Bayer designation for a star is a Greek letter followed by the name of the constellation in which it is found.  In theory, the letter indicates the order of the star in brightness, so Alpha Carina would be the brightest star in Carina, and “Eta” would be the 5th brightest.  In reality, the names were often assigned in the absence of real information about relative brightness – or whether the object is actually a star!