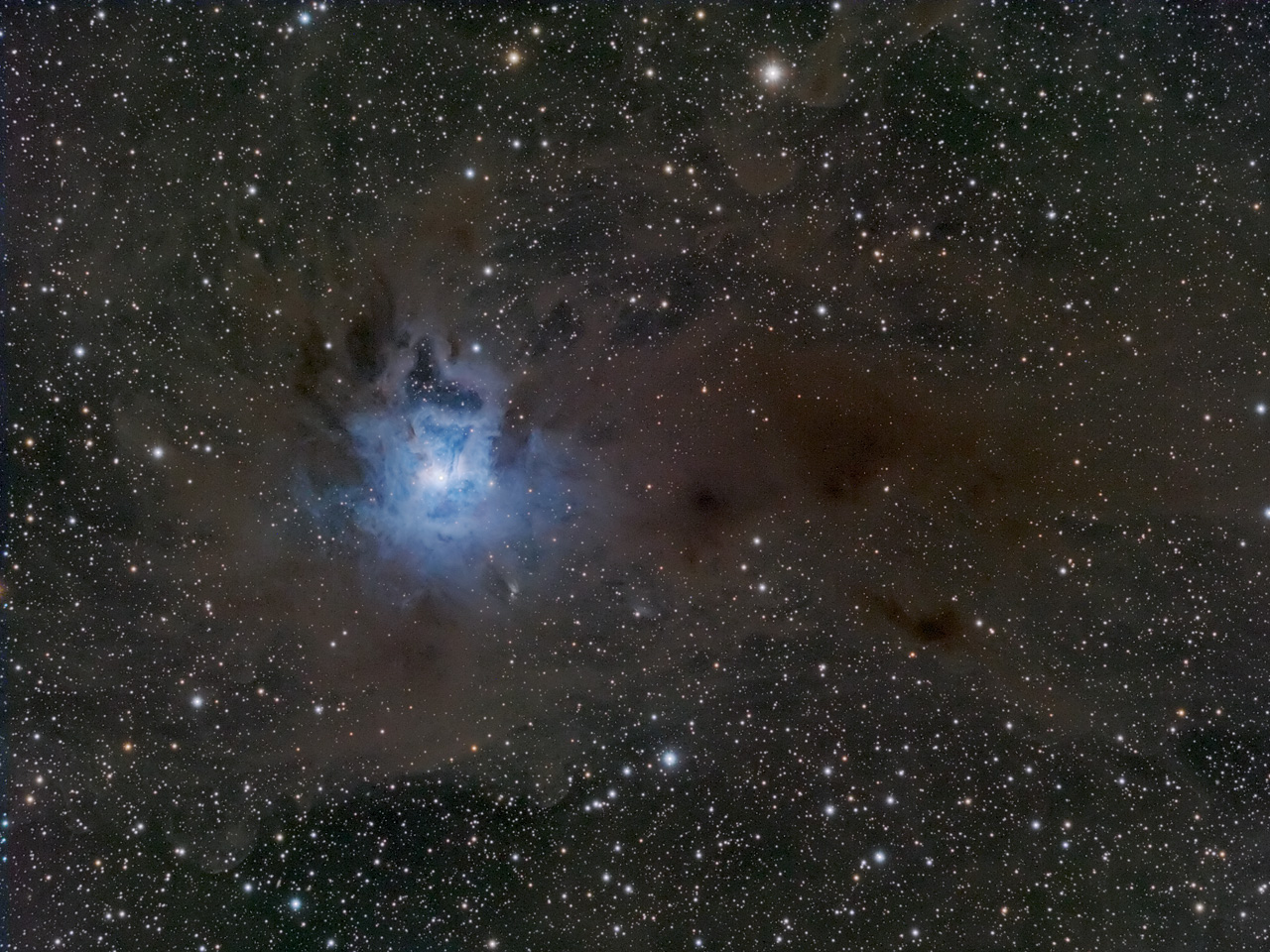 It seems that every year when I go to OSP (Oregon Star Party) I end up shooting this beauty, the Iris Nebula, and each year it gets a little better.  I had not planned to shoot it again this year, but when I saw how good the seeing was on the second night, I just had to drop what I was doing and move on to the Iris.

The Iris (NGC7023) is a reflection nebula in the constellation Cepheus, which has many great targets for astrophotography.  As with the Pleiades cluster, the blue appearance is really just the color of the bright stars that illuminate the surrounding dust, which shows its real brown color in regions farther away from the stars.  In the case of the Iris, the bright star at the center of the blue area is the main source of light.  Of course, that star is really only bright in comparison to the surroundings.  At magnitude 6.8, it is not visible to the naked eye (maybe to a person with exceptionally good eyes in a very dark location), and does not have a name, just the catalog designation SAO 19158.  It is about 1,300 light-years from Earth.

As is often the case, there is a huge range of brightness values to deal with in this target, from the faintest portions of the dust cloud to the central star itself.  In this case I used 3 different exposures (in the luminance frames only):  4 minutes for 16 frames of the darkest regions, 2 minutes for 40 frames of the mid-tones (where most of the blue is), and 30 seconds for 70 frames of the stars.  These frames were stacked separately, then normalized and combined via brightness selection.  The resulting luminance frame was then applied to an RGB image made up of 8 frames of each channel with 4 minute exposures.  The total integration time is roughly 4.3 hours.

At the other end of the spectrum for exposure is this quick shot of the crescent Moon just after sunset:

I don’t recall the shutter speed for this, but it was much less than 1 second.  I shot about 80 frames of it, and intended to stack them to create a better (sharper) image, but something went wrong with the stacking process, and I didn’t want to delay posting this while trying to figure out the problem.

The sky was actually still quite bright when I shot this, but exposing for the brightness of the Moon (even this small sliver of Moon) caused the background to go nearly black.

It was a great star party, with good weather every night, marred only by a bit of wind on some nights.  I’m now thinking about how to block the wind so that it doesn’t knock the telescope about during long exposures.  The trick here is to come up with something big enough to be effective, strong enough to withstand the strong winds we sometimes get, and portable enough to be easily carried.  Strength is more important than you might think:  The last thing you want is for the wind screen to break free and go crashing into the telescope!