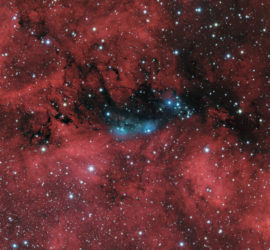 The last of my images from OSP is NGC6914, a small reflection nebula in Cygnus.  To be honest, this includes a lot of data captured from home in addition to what I captured at OSP.  Specifically, the majority of the image (the red areas) are hydrogen, and knowing that I could get that with a narrowband H-alpha filter from home, I didn’t shoot with that filter at OSP. But combining the RGB and H-alpha data did not work out the way that I had hoped.  If there were no stars in the image it would be a simple matter of […] 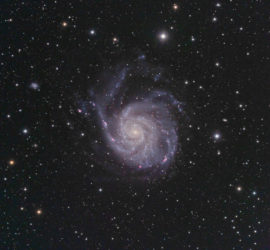 Here’s another image from the 2019 Oregon Star Party, M101, the Pinwheel Galaxy.  Also cataloged as NGC5457, the Pinwheel is a large galaxy in Ursa Major, and about 21 million light-years from Earth.  Although not as large in diameter as our Milky Way (170,000 light-years versus 258,000 light-years), M101 has about 1 trillion stars, twice as many as the Milky Way.  It also has a lot of hydrogen regions that are typically star-forming regions. As with most of my broadband (natural color) images, this was captured and processed using LRGB, with only a handful of color frames (8 each of […] 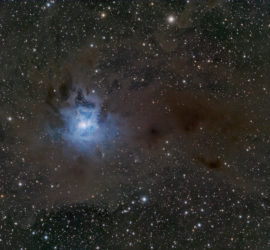 It seems that every year when I go to OSP (Oregon Star Party) I end up shooting this beauty, the Iris Nebula, and each year it gets a little better.  I had not planned to shoot it again this year, but when I saw how good the seeing was on the second night, I just had to drop what I was doing and move on to the Iris. The Iris (NGC7023) is a reflection nebula in the constellation Cepheus, which has many great targets for astrophotography.  As with the Pleiades cluster, the blue appearance is really just the color of […]