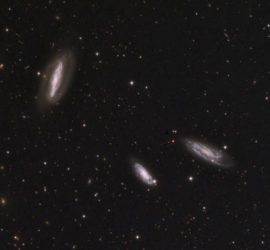 In another image from Australia we see the Grus Quartet, consisting of (from left to right); NGC7552, NGC7582, NGC7590, and NGC7599.  The 3 on the right are sometimes called the Grus Triplet, but the other is such a nice barred spiral galaxy that it would be a shame to exclude it. All 4 galaxies are relatively close to each other, and probably interacting with each other gravitationally.  Their distance from Earth is estimated to be in the range 55 to 70 million light-years – far away indeed.  But if you look closely you will see numerous smaller galaxies, and they […] 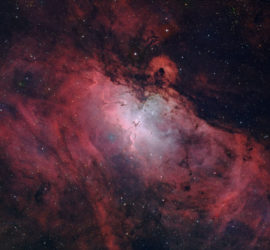 Charles Messier’s 16th entry (M16) in his now-famous catalog of celestial objects that aren’t comets is also known as the Eagle Nebula.  To me, a wide view of the nebula such as this does indeed resemble a bird of prey, although I’m not sure this is what they had in mind when they named it.  The outstretched wings in red are nearly impossible to see through a telescope, and it is rare for an object to be named for its photographic appearance. In any case, M16 is a great target for either visual or photographic astronomy.  In my part of […] 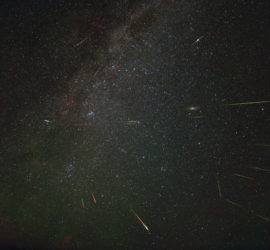 The last night of the Oregon Star Party (OSP) was a day before the peak of the annual Perseid meteor shower, but close enough that we were seeing a bunch of them.  And that last night was pretty much clear of the smoke that had plagued us all week, so I set up a DSLR camera with a fast, wide-angle lens on a tracking mount to capture a few of them. The above photo is a composite of more than a dozen individual frames containing one or more meteor streaks.  The camera was pointed toward the constellation Perseus, which was […] 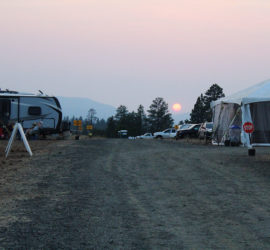 The number one topic of conversation at the Oregon Star Party (OSP) this year was that there is no longer much doubt that wild fires are increasing in frequency and size, and that this has a major impact on amateur astronomy.  Nor is there much doubt that this will continue to be more of a problem in the future – at least until all the vegetation on the west coast is lost to fire and there is nothing left to burn. I was at OSP from Tuesday through Sunday and the air was hazy from smoke almost the entire time.  […] 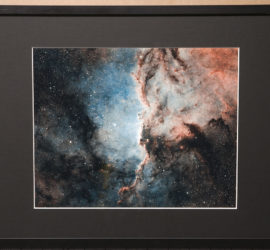 The word of the day is chaos.  I’ve been getting ready for OSP (the Oregon Star Party), which starts next week.  To give you an idea of just how busy it has been here at Wa-chur-ed Observatory, we’ve had multiple nights of beautiful, clear skies lately, but I have not been out to the observatory at all – too many other things need to get done.  Very few things have higher priority for me than collecting a few photons from a dark sky. But I do have some progress to report as a result of my “indoor work”:  First, I’ve […]