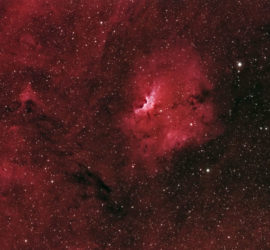 This is Sh2-135, another obscure nebula from the Sharpless catalog.  It’s almost entirely red because it’s almost entirely made up of hydrogen – and even the H-alpha signal is pretty weak.  The brightest part of it (near the center) also contains a bit of Sulfur, which I have assigned to blue-green, so it is leaning very slightly toward magenta, but still looks pretty much red.  In summary, the hydrogen was weak, the sulfur was extremely weak, and the oxygen was non-existent!  I integrated about 11 hours of exposure time here, including the O-III, but it would look pretty much the […] 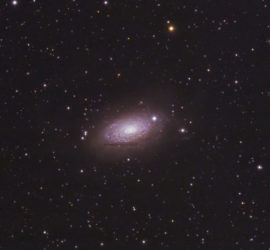 The Sunflower Galaxy (M63) is a large, but very distant galaxy in the constellation Canes Venatici.  At a distance of about 27 million light-years, it is amazing that we can see this much detail.  In fact, I rarely photograph galaxies because most of them are so small that it requires excellent conditions (very dark skies and low turbulence) to get a decent image.  I shot this at last week’s star party, using the William Optics FLT-132.  This is actually cropped quite a bit and includes less than half of the full frame.  You can see another galaxy in the upper […] 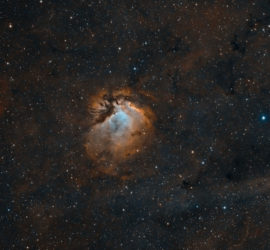 I’m about to leave for a star party, but had to stay up late last night to finish capturing this target, and then felt compelled to do at least a quick processing to share it with you. Continuing last year’s exploration of the Sharpless Catalog, this is Sh2-112 in the constellation Cygnus.  The main (brighter) part of this nebula is a bit small for my telescope & camera, but there is a good deal of dimmer nebulosity around it, especially on the right side in this view.  And this dimmer nebulosity seems to contain all 3 of the emission lines […]