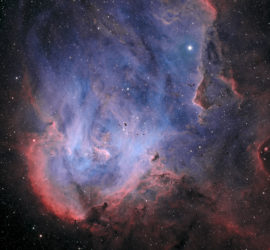 Many of the objects in the southern hemisphere sky are unfamiliar to me, including this, the “Running Chicken Nebula” (IC2944).  But I also wasn’t expecting to have another image for you so soon.  There are a bunch of targets in the queue that are RGB rather than narrowband targets, and these take longer to capture because you have to wait until there is no Moon out – on top of everything else that can get in the way of astrophotography.  Somehow, I thought this was one of those targets, but it is mostly emission nebula, and thus a narrowband target. […] 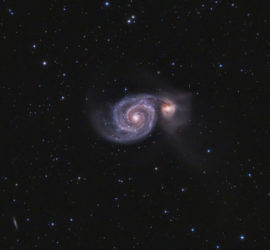 This is M51, the Whirlpool Galaxy, which I last shot 4 years ago.  It’s fairly small, so it’s difficult to get a sharp image, and I don’t often try.  The above version is cropped to less than half the full frame, and the galaxy is still a small portion of the area.  Below is the (almost) whole image: It looks a bit sharper this way, and you get to see at least one more galaxy in the lower left corner. This image was put together from about 2 hours of luminence data and 2 hours of RGB data.  As with […] 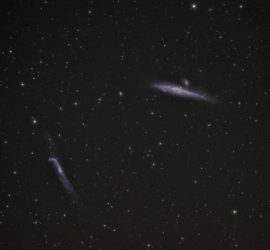 From the first dark site star party of 2018 this past weekend, this is the Whale and Hockey Stick galaxies (NGC4631 and 4656, respectively).  It’s also my first LRGB image with the new FLT132 telescope, and I’m happy to report that the L frames were just as sharp as the RGB (which was not the case with the previous ‘scope, due to residual chromatic aberration).  It might not have been a good test of chromatic aberration because less-than-ideal seeing made all frames less than perfectly sharp. I shot more than 7 hours of this target, but discarded about 2 hours […] 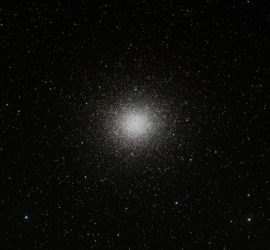 Amateur astronomers often debate which globular cluster is the best, or prettiest.  I’m not sure I would enter into that debate even if I had an opinion, so I’ll stick to the facts:  Omega Centauri, also known as NGC5139, is the largest globular cluster in our galaxy.  Or at least the largest one visible from Earth.  Since these clusters are generally located outside the disk of the galaxy, they are not hidden behind the dense dust lanes of the disk, so it probably is the largest one. Located some 15,800 light-years from Earth in the constellation Centaurus, the apparent size […] 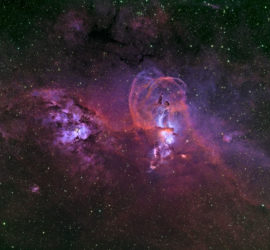 My latest image from Australia is NGC3576, the Statue of Liberty Nebula.  In case you don’t see it, the statue is the brighter region on the right, surrounded by swirls of color.  As with all narrowband images, this is false color, and I intentionally tweaked it to be (sort of) red, whte, and blue.  The shape of the statue is actually more apparent with a different color scheme, so I might decide to change this after spending more time with it.  The other nebula on the left is NGC3603. There is also some nice dark nebulae near the top that […]